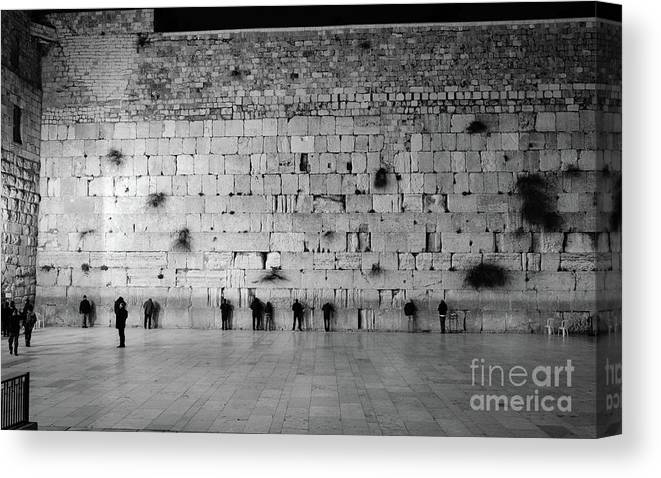 The Western Wall, Jerusalem 2 canvas print by Perry Rodriguez.   Bring your artwork to life with the texture and depth of a stretched canvas print. Your image gets printed onto one of our premium canvases and then stretched on a wooden frame of 1.5" x 1.5" stretcher bars (gallery wrap) or 5/8" x 5/8" stretcher bars (museum wrap). Your canvas print will be delivered to you "ready to hang" with pre-attached hanging wire, mounting hooks, and nails.

Art is unquestionably one of the purest and highest elements in human happiness. It trains the mind through the eye, and the eye through the mind. As the sun colours flowers, so does art colour life....Congratulations on your recent sale of an amazing work

Congratulations! Your outstanding artwork has been chosen as a FEATURE in the “The Gray Scale Outdoors” group on Fine Art America — You are invited to post your featured image to the featured image discussion thread as a permanent place to continue to get exposure even after the image is no longer on the Home Page.

Congratulations!! This beautiful image has been selected to be featured for the week in the “Shadow Silhouettes and Reflections Outdoors” Group Home Page. If enabled, your image will be posted to our group Pinterest Page. You are welcome to add a preview of this featured image to the group’s discussion post titled “Featured Images – March 2018” for a permanent display within the group, to share this achievement with others. Thank you for your participation in the group! ~Jan